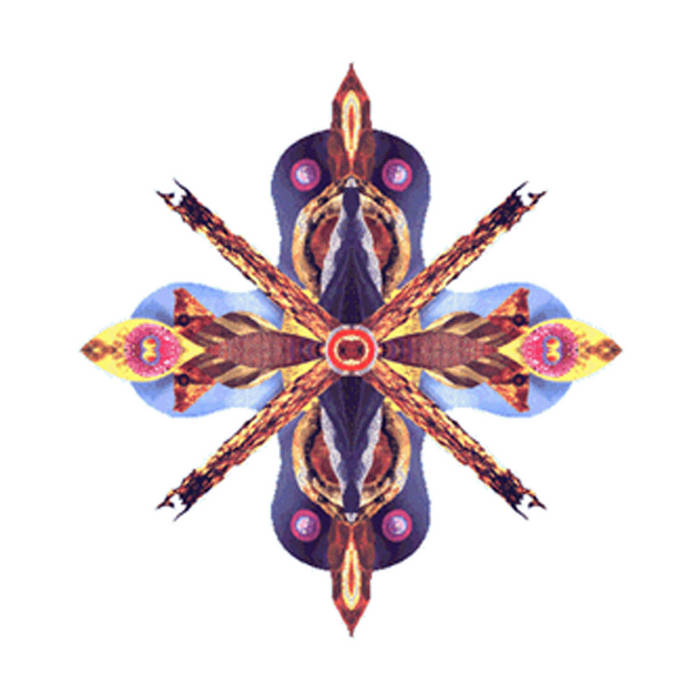 The longer pieces in this collection date from the Chromium Nebulae period : live, one-take keyboard improvisations over very spare looped structures, if any at all ( in fact, the backing structures of tracks 3 and 8 were stripped out leaving only the solo takes ).

All the remaining pieces exhibit the influence of an Atari 1040ST running an early version of Cubase. This software was beautifully simple, and generally fairly solid, but there remain several horrific memories of the system freezing before a crucial save had been executed, and whole, complicated sections needing to be re-written while still fresh in the memory.

Some pieces are based around an initial improvised melody, but the majority were written from scratch on the computer.

The longer pieces were recorded to the same Tascam cassette 8-track used on the Chromium Nebulae album and mastered on quarter inch tape on a Revox B77. The other, computer sequenced pieces, were recorded direct to the Revox, using the Tascam simply as a mixer.

Three weeks after mastering the album, all the studio equipment was stolen during a break-in to Manning's as-yet uninsured appartment.


“ Anthony Manning is not your usual techno producer by any means. He thinks very differently. Eccentric even. Influenced by assorted musical styles and yet coming up with something unique and special, this album is definately an acquired taste, but will reward real listening. By real listening I mean concentrated, focused listening. This is head music that appeals to the mind, the ears and the heart equally, but is enjoyable and accessible if you are prepared to approach it on its own terms, not having expectations or preconceived ideas about what the music should do or sound like. This is the main function of real music : it should be enjoyable - even if it is challenging, which it does by making the challenge an experience, and it should change the way you perceive, help you understand your relationship to other people, society, the world around you, or simply yourself.

'Concision' is comprised of many short, fleeting tracks that appear as vignettes, episodic aural sketches that tease your senses, playing with mood and style in a masterful way. A short Beethoven-influenced piece opens the cd and similar episodes make appearances throughout. Melody and timbre are paramount, texture and sound layered into evolving yet always simple structures. No tracks are named, and in this way 'Concision' becomes more a whole composition than a collection of individual tracks. Very modernist yet very classic. Like an unfortunately small number of electronic producers, Manning realises the role of 'composer' in the classical sense, and in the process takes the music to new heights of artistry and depth.

It is work like this ( and Speedy J's recent music ) that truely forwards abstract electronic music into the 21st century. If Beethoven were alive today, he wouldn't be writing symphonies, he'd be in the studio composing. Spearheading what is one of the most futurist approaches to music out there, the dancefloor becomes irrelevant, the notion of entertainment is exposed as the diversion it really is, and electronic music becomes a pure artform, along with literature, theatre and visual art. A very abstract and demanding idea perhaps, but then that's what we really need if we are to escape the homogenisation and destruction of everything that really matters by those with muuch less noble interests. Art and corporate tactics don't agree with each other, and that is good. ”
xlr8r 3.98

“ Anthony Manning's recordings for Irdial have numbered among the label's most ponderable to date. His work has combined extreme focus with a consistently beguiling compositional restlessness. Sounds and even structures might carry over from album to album or track to track, but never unscathed, and always in ways that suggest that Manning delights in a search he hopes never ends. Combining formal study ( he somehow manages to score his tracks ) with a wilful disregard for the gathering conventions of both electronica and the more arsefaced academicism of the hard disk set, Manning approaches the formal properties of composition with a discretion that might almost count as disinterest if it weren't for the emotional verity of his music.

'Concision' finds Manning once again purging his machines of everything they know. More minimal than 'Nebulae' and less obscure than 'Islets', the 16 untitled tracks on offer here are among his sharpest, most refined to date ( which is not necessarily to say they are his best, but a few of them rank ). Moving, for the most part, away from the drab, cloudy impressionism of his earlier work, Manning bears down on a few obliquely related themes, revisiting them at intervals and in constantly shifting contexts. A few of the cuts integrate rhythms familiar to the armchair post-techno lot, with moments of these carrying off into an almost absurd corner of might be described as baroque-post-classical downbeat electro, combining slow, dense machine rhythms, billowing synthi breaths, electric piano trills, absurdly thick basslines, and spry, jumpy melodies as cartoonish as they are deranged. ( How Manning manages funk in such a context is beyond me, but there it is, a sort of fancifully formed soundtrack to an Oompa Loompa breakdance competition that never was ). But just as much of the album is given over to solo piano meditations and smudgy diffractions of imprecise electronics and analogue distortion, which means that 'Concision' is a dynamic ( if not terribly diverse ) listen. Some of the tracks beg the question of how Manning knew he was finished ( or, indeed, whether he'd even begun ! ), but the simplicity only rarely sounds slack. A nice diversion. ”
urban sounds 3.98

“ This is the third album from Anthony Manning, who established an underground following with his previous two - 1994's 'Islets in Pink Polypropylene' and last year's 'Chromium Nebulae'. He's also recently been working with Guy Sigsworth, who was responsible for defining much of Seal's early sound. But Seal is a million miles away from the mind-stretching panoramas of 'Concision'. Two minutes in and you've already undergone a rollercoaster ride of influences. From avant garde pianists to TheThe-meets-breakbeat. From that straight into the main opening track track, which tries desparately to keep some awesome acid bursts ( like a mad flurry of funk from the spaeship at the end of Close Encounters ) from heading out of control. In fact this whole album should be directly injected into your headphones, rather than pumped across a dancefloor.

LPs like this one - which come across like perfect home studio doodlings - are a more personal experience than something specifically designed for mass consumption. From freeform ( or rather random ) jazzy workouts to two-and-a-half minutes of spooky Wurlitzer meanderings, this album is full of threads started by the likes of Phillip Glass and LaMonte Young and continued in recent years by Andrew Poppy and Charlemagne Palestine. Only this time the remnent sounds of techno and ambient house are in place to hook in a wider audience. As there are no track titles I can only say that this album is very much a peak-trough-peak affair. For example, track 10 is cool, whereas track 11 is awful, but 12 wild ...... whatever they're called ! ”
dj 12.97

“ This disc on Irdial is quite unusual, as is most of the label's catalogue. Concision operates around a central theme which is introduced on the first track and then reiterated, reconfigured, embellished and elaborated upon for the several tracks that follow. The result is an engaging flurry of sound with occasionally elaborate arrangements and instrumentation. Anthony Manning takes instrumental, 'artsy' music to the hilt, and Concision is a prime example of this talent. ”
ennui winter 97

“ First manning release to use computer sequencing programs, which broadens his pallette even further, when you get beyond the ‘techno’ stylings of the sounds and processes (drum machines, synthesizers) you can start to realise this is all about composition and timing, texture and space. We are told that this guy listens to a lot of classical music and by now on his third album proper it starts to show, though the influence is channelled through technology with bizarre and complex results. ”
These Records

“ In his latest effort, Manning takes on classical music and offers his unique electronic interpretation of sundry styles in byte-sized synopses. The themes and melodies are often naggingly familiar - an opening piano phrase takes a swipe at Liszt, Chopin and Prokofiev within less than thirty seconds ! Whether offering an Egg-styled ice-rink toccata, playful Bartokian dances flecked with peppery breakbeats, or Pagganini with a schpritz of dirty synthfunk, Manning's switched-on curios are impeccably realized and performed with an impossibly straight face. ”
motion 9.98

“ This was apparently the last thing Anthony Manning managed to record in his home studio before everything was stolen, but what a record it is. The music is like nothing else, with structures from contemporary pop and classical music, and layers of psychedelia this might very well be one of England’s most important releases ever in the field of electronic music. Classic timeless album that just seems to flow in the realms of time. Simply ACE. ”
tine, discogs.com

“ Manning's third Irdial album shows he hasn't stopped expanding his methods. Although he's still pursuing the kind of fusion of post-classical and ambient / experimental electronica evident in his previous work, Concision finds him adding rhythmic elements more immediately recognisable to the pot-techno lot - machine-bound breaks set in a downbeat electro lope. Where these appear ( on only a handful of cuts actually ), they are less the bleating pulse of a dance track than he sketching of a framework ( an unfortunately underdeveloped one ) for the interlocking explorations of melody and timbral nuance that organised his previous recordings. Recurring themes seem to tie much of Concision into a solid, oherent package, while the tracks switch restlessly between austere solo piano, haunting drones, and stolid, fuzzy, Blade Runner-esque atmospheres. A nice listen now and again. ”
getmusic.com

“ Synthesizers and keyboards analogiche - included the good old organ hammond - in what, being at my calculation, would have to be the third solo work of Anthony Manning. Timbriche and mailing that send again to the seventies: an irritating pot-pourri of barocchismi and common places that restore to the mind the good old Jon Lord of deeppurpleiana memory while, in beard to the title, the conciseness is really l' last problem than Manning itself seems. A more recent point of reference to understand this CD would be able to be the Richard D. James Album, even if here the rhythms are except for convulsive when you do not go out. I am not been certain between those who they fired to zero nell' last production of the twin one but today, to the light of like shufflings, is appeared absolutely noxious. If some year does I would have thrown this disk directly nell' dirt in these days of fine millennium, voted all' indulgence, not only I trace of it a profile but, conscious that the champions dell' exotica uber alles will find it splendid, do not I succeed to come down the of under of a benevolent inadequacy. ”
blowupmagazine.com