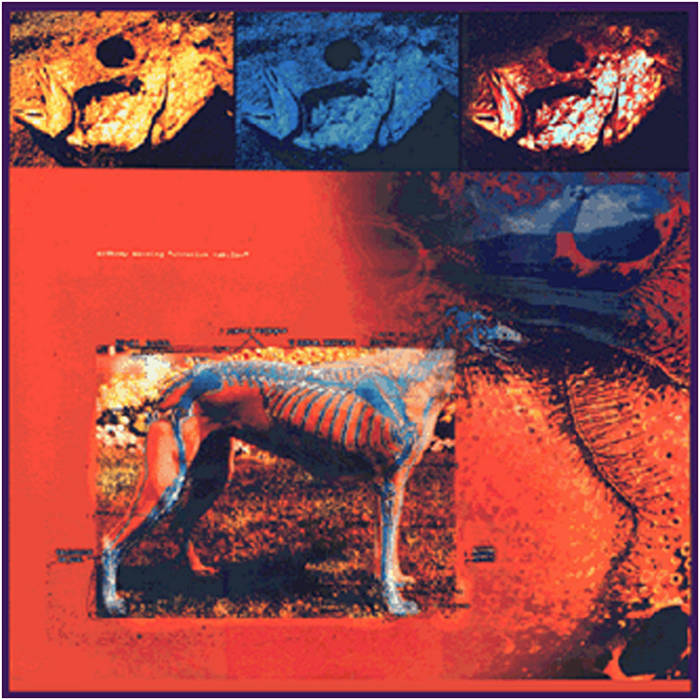 For this series of pieces the Roland R8 drum machine was joined by a first-generation Novation Bass Station, an old Yamaha DX7, and a cheap effects unit. A borrowed Yamaha QX7 took care of sequencing requirements.

Extensive use was again made of reams and reams of graph paper, as this sequencer offers only a tiny lcd screen for editing purposes. Raw melodies were improvised real-time into the QX7, and the recorded values drawn onto graph paper scrolls, to enable better visualisation of melody flow, to aid with writing companion phrases, and to map out the structures. Several pieces feature live takes of keyboard improvisations recorded over a base structure of looped sequences.

The pieces were recorded onto a cassette-based Tascam 8-track and mastered at Irdial's studio onto an ex-BBC half inch tape deck.


“ Anthony Manning's compositional methods are based around his own unique system of notation, using geometric shapes on hand-made rolls of graph paper. Using this system, he completes all his music before transferring to synths and sequencers. It's an approach which offers some clues to the strange, oblique mantras which drift through 'Chromium Nebulae' like dreams. There are no track titles, just pure sonic sculptures which float through different worlds, twisting, at times, close to the quiet shimmer of Deep Space Network or the ice-cool abstraction of Pete Namlook. Music to be alonw with. to wrap yourself up in and, ultimately, music which sets its hooks deep inside. It's weird, sure, but what isn't ?

'Chromium Nebulae' is full of burning moments, phantom melodies and warm, sinuous harmonies. Different music. Sounds which lock and unlock, drift apart and then merge softly. Like freefall in outer space. There are times when Manning steers a course too close to the edge, colliding pretty notes with endlessly stretched silences. But it's a compelling balancing act all the same. Wild, uncompromising and deeply beautiful, this is a record which is worth your time. Another kind of trip. ”
generator 1.96

“ This album sails way out past idiosynchrasy to the invigorating waters of the unique. Not since the days of Richard James' emergence has someone sounded quite so out on their own. The originality of his geological tones, laval creaks and spiralling keyboards should mark him out as an object of veneration for spliff monsters, sound junkies and avant gardists alike. ”
nme 3.2.96

“ It's been a very long stretch of time since a purely beatless ambient-electronic album has captured my attention so completely and even longer still since someone in the dance community has issued such an album. The development of each track ( 8 in total ) is a mysterious unfolding of natural recordings and sound-bits, far-off and reverberating synth tones and an overall use of quiet and negative space. There are moments of darkness and contemplation as well as lighter, playful compositions that are far from trite. There are no titles, track numbers or recording information. The only grounding is the cover art, the music and your imagination. Not much else needs to be said really other than this is a thoroughly unexpected bit of brilliance in a time when music is becoming sadly predictable : for electronic music fans this is a must. ”
connect 2.96

“ There's avant garde and there's avant garde. And then there's this album. Give it a listen and you immediately begin to form a mental picture of Anthony Manning. Probably wears a lot of black. Unkempt hair. Aphex Twin avoids him, complaining he's "too weird"

In actual fact, there is some comparison between Manning and Aphex. Both indulge themselves in exploratory, experimental electronica and twist sounds to their own will, the difference being that Aphex does things slightly more tongue in cheek, his more off-kilter work is often suffused with a sense of fun and is also likely to be offset by moments of uptempo exuberance.

Manning's work here, though, is done with the straightest of faces. From the first moment it throws the listener off balance and keeps them there for the duration of the entire album. In return for the intensity you get what is a concise experience. Not ambient, but unsettling and darkly atmospheric : an album you'd hesitate to listen to with the lights off. It's a trip, sure, but be warned ... ”
dj 2.96

“ A dark, brooding meditation on electro-symphonic minimalism, Manning's 'Chromium Nebulae' is his most accomplished, satisfying work to date. His aversion to presets translates his music into a collection of alien, sometimes threateningly synthetic soundscapes, giving the listener little footing in the predictable, but also offering much to those willing to abandon prejudice. ”
getmusic.com

“ Adventures within the melody matrix. Eliptical orbits of rhythm and (for the first time in manning’s work) synthesizers used for more overtly musical settings. Initially seems a lot more ‘straight’ than before as the use of more regular sounds in the rhythm and melody lines are recognisably similar to various techno and even ‘progressive’ records you may have heard before, but getting past that on repeated listens there is a deeply eccentric and sometimes overtly strange quality to this record which makes it transcend any attempt to pin it down. ”
These Records

“ I find this LP should licence the German grammophon. A classical author simply. Super+diagonally in each regard, very much crunchy, and as on most its other LPs no longer in such a way Gloeckchen vernarrt. In the reason 'Chromium Nebulae might be' the entire Locust/Disjecta surrounding field into the bag. Much loop-oriented music, which again destroted its own sounds under the hand, without sounding academic thereby. In completely self-willed way this is the plate of Anthony Manning, which is still at the earliest Techno, but is also clearly as a follow-up of Sun RA to see.

"Strange and searching electronic cult classic from Anthony Manning on the iconic Irdial Discs label. Spread across two discs, 1996 LP Chromium Nebula sees eight untitled compositions from Manning each around the 10 minute mark, all with their own oblique mystery and sense of otherness. Its beatless, atmospheric music in its purist form - fathomless electronic soundscapes constructed through warm overlapping tones and stretched-out elliptical rhythms shifting between undertones of melancholy, wonder and intrigue. Manning’s minimalistic yet complex compositional structures often feel formless, much like that amorphous nebula referenced in the title, which transcends the lazy ‘ambient music’ tag often attached to the work. Certain lilting, melancholic moments certainly recall AFX’s SAW II (who famously described manning as being ‘too weird’), whilst other bits recall the synthetic minimalism of Romanian composer Costing Miereanu on Poly-Art Records. A rightly celebrated moment of experimental genius adjacent to the UK techno sprawl."
allnightflightrecords.com